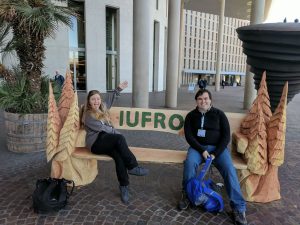 Conferences are always a little strange; packed with a quagmire of human interaction and awkwardness, along with some hope and disappointment.  They bring out and encourage the utmost professionalism through knowledge exchange, presentation and discussion of research from around the world.  On the other hand, it creates that type of school-playground feeling, especially during the breaks where eyes constantly search, dart from side to side to find focus beyond the apparent isolation: everyone wanting someone to stand next to at the very least.  There are, however, many that come in vast groups from their institutions or universities with ready-made support, friends and dinner pals; tucking away and trying the local alcohol, whether beer, wine or brain-melting spirits is a must at conference.  In the end, what do we want from a conference? Our work to be praised and constructively challenged; to expand networks; find collaborators and friends; and to expand our minds with new ideas and information from around the foresting world. 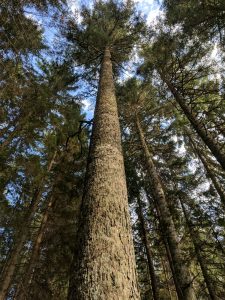 Our group of four (two PhDs, one Post-Doc and Lecturer, in addition to an Honorary Professor) from a university research group in its infancy went to fly the flag (at least that was the official line), present our research and learn from forestry researchers around the world.  The conference took place in Freiburg, Germany; a small city, packed with history and character, and surrounded by the iconic and famed Black Forest, or Swartzwald.  Ironically, the conference was so packed with talks from 8am–7.30pm each day that one completely missed the real forest, and only encountered it in pictures when stuck in lecture halls and conference rooms.  Three options were open to the researcher, to remedy such a horrendously inappropriate situation:

We courageously took the last day off to venture out into the Black Forest, as our contingent had delivered all their individual presentations and sessions.  Unencumbered by the weight of obligation, we hopped on the train with our conference passes, which allowed us unimpeded travel throughout the region’s public transport system, and headed out. 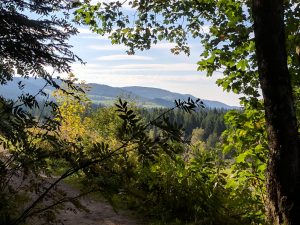 As we climbed into the hills of the forest, we pressed our faces against the train window; cooing at the colours, the size and design of the forest, the mixture of species, the silvicultural systems in place and the general vista of arboreal brilliance that greeted us.  We were, admittedly, huge forestry geeks. After stopping off for some schweinhaxe and beer, we hiked into the hills, which were filled with large, straight and girthful spruces with an understory of hazel, sycamore, birch and a few minor examples of aspen and alder.  Autumn colours were beginning to present their fine plumage, and one particular oak (quercus robra) was oozing a fine red pigment that offset the blue sky beautifully.  My colleague, however, remembers one thing above all, and that was encountering a Camberwell Beauty (butterfly, or smetterling!), something he had never seen before; and, as an entomologist and keen lepidopterist, this sighting was “the best thing in ever!” So, for a solid twenty minutes, we huddled around a mature sycamore secreting unusual amounts of resin (the tree, not us), which also attracted some Red Admirals and a swarm of wasps; taking photos, zooming in, taking photos of us taking photos, and secretly hoping that the Camberwell Beauty would land on one of us, anointing our esoteric worth.

We needed more than one day in the forest, but lectures, deadlines and Monday mornings are rather stubborn in their regularity and inevitability.  So some honey, licore, wood and other random paraphernalia was purchased, whereupon we returned to Freiburg and met some conference colleagues for a few last night beers.  At 3am we found ourselves at the tram stop, wanting to return to our hotel and warm beds for the few hours of sleep before leaving in the morning.  My colleague continued to talk about the trains and trams (they were almost as interesting as moths and other such bugs), as drunken and dejected football supporters crawled by.

So what did we get out of the conference?  People saw the research we were doing, engaged us in discussions, talked about talking more about research and mutual directions; can we write a paper, see possible collaborations that would increase our impact factor, or access some pots of funding?  Genuinely, everyone was interested in what everyone else was doing.  I know I was internally and sometimes externally exclaiming, “that is so cool, I wish I was doing that!”  I continue to marvel at the intelligence, scientific robustness and thoroughness of the presented work.  It was and is, however, a vast international conference and some presentations didn’t quite do justice to the research; and, as a native English speaker, I felt I had an unfair advantage, that I was cheating, even if 67% of my jokes failed to land. 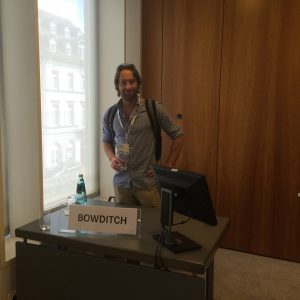 This year was weird as I was organising my own conference session, as well as presenting in my own session, so earlier in the year I had the dubious honour of accepting my own abstract along with some really interesting research from around the world.  Luckily it was the second session on the first day, so I did not have to wait or fret for long.

Unexpectedly, the session was quite well attended and the participants were forthcoming with questions.  I was a little nervous before the start but decided to dive in and see what happened. When presenting, it is always good to keep eye contact with the audience and project as far as one can, although this has some disadvantages as one is constantly exposed to varying expressions: the stony-faced, the nodders, the yawners, occasionally those sleeping, as well as some making feverish notes, those rifling through the conference book looking at subsequent sessions, and a minority scratching themselves or absent-mindedly picking their nose.  I am always uncertain as to whether my talks have been well-received or if people have any real interest or issue with the research, but the release, once finished, is great; a combination of relief, a little bit of a high and satisfaction at a task complete.  And if people come and want to chat afterwards, well then, all the better. 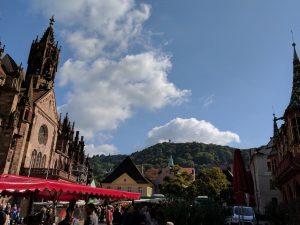 I will sign-off with some conference highlights: a friend falling off a stool in a bar and scraping their back; the weird Eurovisionesque Gala dinner that had no dinner included, though there was an open bar; seeing a golden eagle; eating huge amounts of pork; smiling at random conference-goers; new ideas scrambling out of my brain; speaking some bad German; being accused of proposing to two Swedish researchers simultaneously; garlic bratwurst; markets; everyone cycling; feeling proud, scared, shy and confident; and so, so many tree, forest and arboreal related delights!