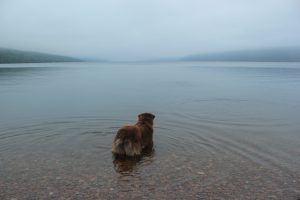 Named after a female bear and a peninsula in southern Costa Rica, this bundle of neurotic hairy life has been Euan’s constant companion over the last eight and half years, in four different countries.  Born in the backwater of south-west Virginia, his first couple of years are shrouded in mystery; until he arrived at Dublin Animal shelter in Polaski County VA, where he encountered a red-bearded Englishman; a fresh Hokie, unable to resist his lama-butt wiggly energy.  It took a while for Osa to stop sitting on his new owner’s lap while he was driving (Osa is 80 pounds). Eventually he moved to the passenger seat, and finally to the boot; where his eyes and nose poke out from between the back headrests.  Since the meeting of Osa and Euan, their souls have entwinned and their hairy bodies have come to increasingly resemble one another.  Osa is a self-proclaimed redneck but is now a naturalised Scot with a heritage reaching back 6,000 years of herding and protective instinct. Half Anatolian cattle dog and half Australian shepherd, Osa is incredibly wilful and has herded sheep, cattle, rabbits, other dogs, horses, and on one occasion a herd of bison.  He is obsessed with balls and loves to hump most things moving or inanimate; but especially rucksacks and Cairns at the tops of Munros.